Peter Nicholson is a rich man and he knows it. For more than a quarter of a century, he has parlayed a strong entrepreneurial drive into a growing fortune, which at last count had resulted in a net worth somewhere north of $20 million.

But for all the money Nicholson has made, the 50-year old Halifax native can’t seem to shake a feeling that he’s growing poorer by the day.

Particularly in recent years, cash flow, or lack thereof, has become a growing thorn in his side and something he knows he needs help to solve.

As a result, he travelled to Montreal from Ottawa in mid-June to attend the latest local members’ meeting of Tiger 21, a peer-to-peer learning network for ultra-high-net-worth individuals like himself.

Nicholson has been a long-standing Tiger 21 member of the Montreal group and for the second time in less than two years, he is once again baring his soul during a 90-minute presentation to nine other members.

“I’m just tired of being cash poor,” he tells the group hunkered down in a conference room at Le 357c, a private club in the port area of old Montreal. “Being worth $100 million is not my goal, but I have to figure out how to be more balanced.”

Founded in 1999, Tiger 21 has more than 330 members who collectively manage US$30 billion in investable assets. The annual fee for joining is $30,000 per member and chapters are located in 19 cities across North America including New York, Los Angeles and Chicago, as well as Toronto, Calgary, Vancouver and Montreal in Canada.

The network’s quarterly asset allocation survey has become an integral resource for wealth managers over the past few years, but the group’s true value may only be felt by its members who are able to share their experiences in a highly confidential environment that is not unlike a secret society.

At its core, Tiger 21’s mission is to improve the investment acumen of its members by critiquing and coaching strategies related to wealth preservation, estate planning and family dynamics.

This is largely done through regular chapter meetings that are managed by professional facilitators.

A typical meeting lasts all day and includes open discussions on various topics. It also usually includes one member presenting a portfolio defence, opening up the complete and intimate details of his/her personal investments for review and analysis.

“It really is a great opportunity for a member to receive feedback and really think about their portfolios deeply,” said John Koloda, the group chair of the Montreal chapter, during a phone conversation before the meeting. “If a portfolio defence does not occur, members feel that it has not been as good of a session.”

Nicholson said his portfolio defence is “a little different” than those of other Tiger 21 members who are typically focused on asset allocation and how to preserve wealth — not create it — at this stage in their lives.

In his case, it’s more about tapping Tiger members for some help with his various entrepreneurial pursuits, including his primary business, WCPD Inc., a wealth management firm based in Ottawa that specializes in philanthropic tax-reduction strategies.

Nicholson has asked for a critique of his sales pitch on the advantages of “flow through” mining shares to potential clients. He also wants an opinion on whether or not he should hire a chief financial officer to help manage his time better.

Mainly, however, his concerns are centered on his massive real estate play in Exuma, Bahamas, that makes up the majority of his portfolio.

He was first introduced to the area in the early 2000s by a friend, and was motivated to invest shortly after in order to help some of his clients gain offshore tax-free status.

In the summer of 2011, he was presented with an opportunity to buy 31 villas in a completed resort called Grand Isle out of bankruptcy. Nicholson, always the risk-taker, decided to pull the trigger with a total investment to date of $16 million in these properties, using mostly debt but also retained earnings from his WCPD business.

Nicholson has sold 11 units since then, which has helped lower his debt burden substantially, and he values the remaining 20 villas at a little less than $1 million a pop.

One of the exercises involved in any portfolio defence is to create a 100-year plan for family and future heirs. If all goes well, Nicholson expects the Exuma project to continue growing in stature with international jetsetters and he wants to believe his family name will have a large impact on its development in the decades to come.

Clearly, Nicholson loves what he has in Exuma and already feels a bit like the “unelected mayor” of the place given his influence and ties to the community.

Still, he’s worried that he’s bitten off more than he can chew and isn’t sure what his next plan of action should be.

The day-to-day operation of the villas has been far more time-consuming and emotionally draining than he thought it would be. Based on his current occupancy rate, the investment is also bleeding about $1 million in cash flow per year, putting strain on his other endeavours.

He seems confident that will change with time, but the whole experience has left him fatigued and feeling overexposed.

“I don’t plan to say goodbye and walk away, but I feel emotionally drained,” he said. “Going forward, I would like to focus more on my philanthropic tax planning than on Exuma. I feel like I’ve broken my back on it and it’s a hard place to make money.”

The other Tiger 21 members in the room are sympathetic to Nicholson’s concerns and are quick to offer friendly advice that could potentially lessen his burden to one degree or another.

“Is there liquidity there? Why not just walk away,” said one member worried about Nicholson’s overall lack of diversification.

Another suggests he reach out to Tiger 21 members at other chapters who might have more experience investing in big real estate projects. The same person adds that, at a minimum, Nicholson should consider doing some downside planning.

“Maybe you drop your drawers on a couple of units to generate enough cash flow so that if something bad happens, you are okay,” he said. “Only you can decide where that comfort level lies, but it doesn’t sound like you are there yet.”

Nicholson seems pleased with the offered advice, though he doesn’t commit to any one action. At the very least, he’s been able to vent his frustrations and explore ways to overcome them.

“Everything you’ve said is right,” he tells his fellow members near the end of the discussion. “I’ve got some homework to do and hopefully a year from now when I get up in front of you again, I’ll be more balanced.” 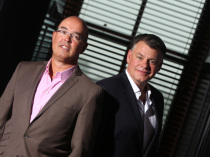 ·          Peter Nicholson (R ) poses with TIGER 21 chairman John Koloda, as he prepares to defend his portfolio in Montreal, June 16, 2016. A normal Tiger 21 meeting lasts all day and includes open discussions on various topics.